At the necropolis, hundreds of ancient Egyptian sarcophagi, cat mummies, and gold-leafed statues were discovered. - Net - Indir Skip to content 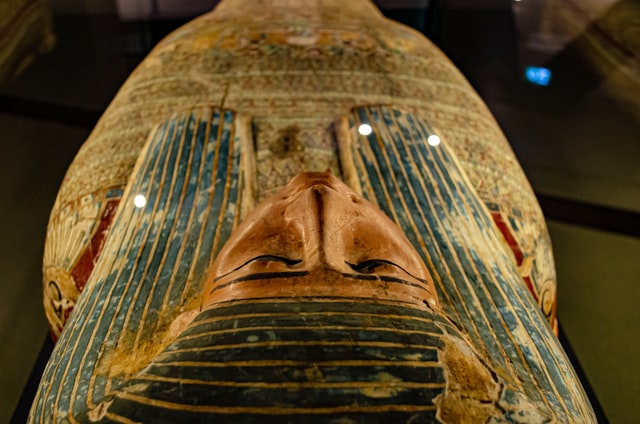 At the ancient necropolis of Saqqara in Egypt, archaeologists discovered a treasure trove of treasures, including 250 whole mummies in painted wooden sarcophagi and more than 100 bronze statues of ancient Egyptian gods.

According to Egypt’s antiquities ministry, the items date back to roughly 2,500 years ago, during Egypt’s Late Period.

According to CBS News, the treasure was discovered at Saqqara’s “Cemetery of Ancient Animals,” a temple complex outside Cairo that was once known as “Bubasteion” – a reference to the ancient Egyptian goddess Bast or Bastet, who was revered there in the form of a cat. Archaeologists uncovered various sorts of mummified animals and statues of different Egyptian gods at the site in 2019, therefore it was renamed.

“Today’s discovery proves that the temple was not only for cats, but also for other Egyptian deities,” said Mohammed Al Saidi, the director of the excavations.

Mummies, statues, and other relics were lined up in front of Saqqara’s Step Pyramid of Djoser for the announcement by Egyptian authorities on Monday (May 31).

The necropolis of Saqqara is located about 15.5 miles (25 kilometers) south of Cairo, near the edge of a desert plateau. Since 2018, Egyptian archaeologists have started excavating the ancient burial ground extensively. Today’s release is the seventh significant announcement of items discovered there — including 59 mummies discovered in 2020, as previously reported by Live Science — and there is still a lot of work to be done.

According to Encyclopedia Britannica, the Achaemenid Persians dominated Egypt as a province of their empire during the Late Period, although Egyptian culture flourished and many temples were created under their reign.

About 150 bronze statues of ancient Egyptian gods have recently been discovered, including Anubis, a god of the dead often depicted with a jackal’s head; Osiris, the king of the dead; Amon-Min, a fertility god usually depicted with an erect phallus; Nefertem, the beautiful son of Bastet; Isis, Osiris’ wife and goddess of fertility; and Hathor, an extremely popular goddess who was deemed the

Two painted wooden statues of the goddesses Isis and Neftis, or Nephthys, a sister of Isis, were also discovered by the archaeologists. Both goddesses are depicted as guardians of a coffin, and each statue’s face is made up of layers of gold leaf.

“They were [in a] sat position [by one coffin], one by the head and the other by the feet, in a position known as ‘the mourners’ or ‘weepers’ for the deceased,” Al Saidi stated.

In the same coffin, archaeologists discovered a roll of papyrus, or reed paper; it hasn’t been unrolled yet, but archaeologists believe it could be up to 32 feet (10 meters) long and contain chapters of the Egyptian Book of the Dead, a ritual text intended to guide a deceased person’s journey through the afterlife. It has now been transferred to a lab for additional analysis.

According to Egypt’s antiquities ministry, this is the first time objects from Egypt’s Late Period have been discovered at Saqqara.

The Step Pyramid of Djoser, for example, was built around 2700 B.C. during Egypt’s Third Dynasty and is thought to be the earliest complete stone edifice ever discovered.

According to National Geographic, Mustafa Waziri, the Secretary-General of Egypt’s Supreme Council of Antiquities, the early stages of the excavations at Saqqara found the unique tomb of a priest and official named “Wahtye” who lived around 2500 B.C. during the Fifth dynasty.

Archaeologists have also discovered the façade of an Old Kingdom burial building, as well as thousands of wooden figurines, wooden cat statues, and even mummified cats, according to him.