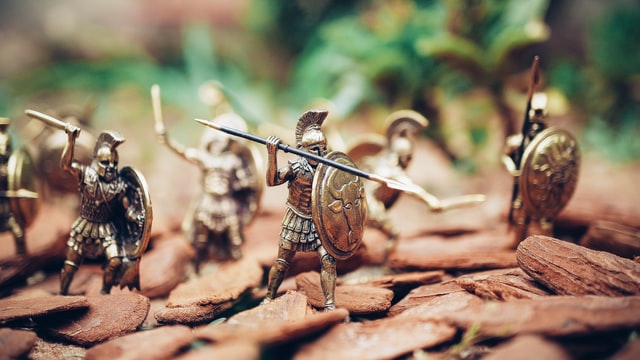 It’s Still a Big World is the newest installment of our series on underappreciated locations.

Few people outside of Sparta are aware that it still exists.

The ancient city-state, which straddled the border between legend and history, is frequently considered to have vanished from antiquity’s map. Sparta–or at least Spartans–have continued to live in the wild, hilly province of Laconia in the southern Peloponnese to the present day. Previously a lonely backwater, the construction of new motorways in 2016 opened up the region like never before, making this distant part of Greece a pleasant two-and-a-half-hour trip from Athens.

Laconia is Sparta’s historic hinterland, from whence we get the word ‘laconic’–to speak succinctly, as the Spartans were said to. King Menelaus established its bounds in Mycenaean times, and they haven’t changed much since. Laconia is a big, thinly populated island surrounded on two sides by two massive, nearly impenetrable mountain ranges–the Taygetus and the Parnon–that meet in the north before diverging in an inverted V shape down to the sea. Between them is the Eurotas river valley, a lush stretch of flat ground where Sparta is located.

Laconia’s communities, some long since conquered by solitude and reduced to a few old barns, falling houses, and stoic churches, are revealed by winding mountain routes. Others, such as Vamvakou, are at the center of cutting-edge, high-tech projects aimed at reviving village life. We stop for lunch in Georgitsi, which is located in the heart of the country. It is situated in a beautiful setting, like an amphitheater of houses erected on the Taygetus slopes, with great architecture reminiscent of a time when villages, rather than cities, were the regional centers of life.

Sparta in modern times is neither lovely nor unattractive. It was rebuilt from the ground up a few hundred meters south of the ancient city in the 19th century. It has a striking grid-like pattern and wide, pedestrian-friendly pavements filled with orange and palm trees (a rarity in Greece). It’s small and quiet, with a laid-back vibe as people go about their daily routines. If you spend enough time here, you’ll learn how the majority of Greece’s oranges are grown in the orchards around Sparta, and you’ll be offered a glass of the town’s ‘orange gold’ to sample. Much of the produce is shipped to Athens, which has helped Sparta maintain a semblance of prosperity as an agricultural center. Tourism, on the other hand, is still in its infancy, with the majority of foreign visitors coming from the United States’ diaspora (notable Spartan-Americans include Pete Sampras and Telly Savalas).

After WWII, it, like most Greek towns, experienced a construction boom that resulted in some truly disastrous results, but pockets of old and new Sparta still exist, particularly in the central square with its neoclassical town hall and the snowcapped mountains of Taygetus rising in the distance. It’s especially atmospheric during the evening volta, when families, couples, and singletons promenade up and down in a sort of rustic rite of passage.

The city features a sprinkling of sights outside of its plaza. The city’s archaeological museum, housed in a splendid neoclassical edifice, is the most noteworthy. It was the first Greek museum outside of Athens, and it has a dusty, old world appeal full with exquisite statues and mosaics of Greek mythological themes. It was opened in 1875, and it is a witness to the Spartaphilia of 19th century romantics.

Aside from that, there’s a branch of the Greek National Gallery in town, an olive oil museum, and a dolmen-like site that’s rumored to be the Spartan general Leonidas’ grave. At the northern outskirts of town, where the rigorous Spartathlon concludes, a big statue of the man himself stands. Gerard Butler arrived here in 2020 to speak his famous statement, in what has to be one of the most painful examples of life imitating art.

It’s a short walk from the monument to the old Sparta archaeological site, which, like many provincial archaeological sites in Greece, is unstaffed and de facto free to explore. Sparta was noted for having no defensive walls (‘Our men are the walls,’ they said) and was less concerned with aesthetics than the Athenians. “Imagine the city of Sparta desolate, with nothing left save the temples and the ground-plan,” Thucydides thought. “Distant ages would be unable to accept that the Spartans’ power was even equal to their fame.” Even yet, with its overgrown olive trees and snoozing cats, it’s an intriguing location. The amphitheater, which is still being excavated and could contain 17,000 people, is the most impressive sight (more than the current population of Sparta). Ancient Sparta, modern Sparta, and the snowy Taygetus mountains – where Spartan newborns thought too feeble were discarded shortly after birth – may all be seen in one spectacular vista from the rim of the amphitheater.

The road south from Sparta is perfectly straight, passing through orange groves and uninteresting villages. The Taygetus and Parnon mountains separate into two peninsulas here. The ancient Spartans retreated to Mani in the 4th century, keeping their distinct dialect, warlike lifestyle, and pagan beliefs (the final settlements were not Christianized until well into the 9th century). The Maniots have a legendary reputation as warriors among Greeks. Areopoli, the area’s largest town, is named after Ares, the Greek God of War. To better defend themselves throughout their centuries-long blood feuds, they lived in towers instead of houses. They were instrumental in the Greek War of Independence, but later assassinated the first Greek President in retaliation. Because the Mani is so rugged and inaccessible, it was more accessible by sea than by land until the middle of the twentieth century.

The route swings inward from Gytheio’s port town via a series of tiny gorges surrounded by heavy vegetation, with jagged mountains jutting out of the ground and into a mist of low clouds. The rugged landscape is blanketed in bright purple and yellow heather, giving our journey a psychedelic feel. With each bend in the route, lofty settlements appear and disappear, many of them looking carved from the rocks, with bell towers rising like periscopes over the unbroken walls. The further we are drawn into the Mani, the further the rest of the world seems to elude us.

I’m relieved to get in Areopoli, Mani’s unofficial ‘capital.’ Areopoli is a one-horse town, but it’s a lovely one at that, with a gray, medieval atmosphere that’s unique in Greece and more akin to a Tuscan village. People claim to be genuine Spartans who have lived in their tower houses since the 4th century BC, while the rest of Laconia burnt around them.

We got a taste of the Mani coastline the next day on the journey to Kalamata, whose airport is the most convenient route to reach the region from overseas. The winding cliffs plummet right into the turquoise Mediterranean Sea, still clothed in colorful carpets of heather and wildflowers. The seaside villages of Oitylo, Limeni, and Kardamyli are unusual for Greece in that they are well-preserved and underdeveloped, evoking a bygone Greece. Mani is beginning to be recognized as one of Greece’s most authentic and picturesque places, after centuries of stoic isolation, while the Spartans have traded in their warlike mentality for a welcoming hospitality. The Greek Deep South is poor, hot, and conservative, but it also has some of the most magnificent scenery and kindest people you’ll ever encounter.