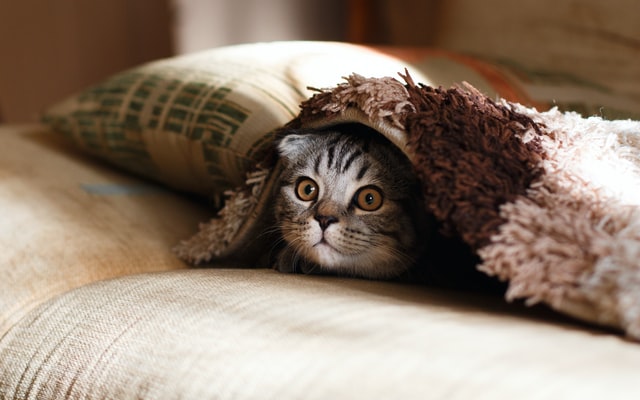 While you might have thought chirping was just for the birds, cats all over the world use it as a means of communication — which covers everything from talking to you, to expressing emotion.Why Do Cats Chirp?If you’re a cat parent then you’ve probably become accustomed to the sweet sound of your cat … CHIRPING!?

Why do cats chirp?

Cats chirp for many different reasons, but a lot of it has a lot to do with their hunting instincts, Dr. Erika Loftin, a veterinarian and critical care specialist at DoveLewis Emergency Animal Hospital in New York City, told The Dodo.

“Generally, cat chirping occurs when a cat is interested in or provoked by prey — like a bird, a squirrel or a rodent,” Loftin said. “It’s more of an excited sound and less of a sound used to hunt.”

This means that cats chirp when they’re super excited about something — so if you notice your cat making these adorable noises as you’re flinging about her feather toy, it’s probably just because she’s excited to play with you.

Keep in mind, though, that there can be other reasons why your cat’s chirping. For example, Celia Haddon, a cat behaviorist, says that chirping might also be a sign of frustration.

Why do cats chirp at birds?

If you’ve ever spotted your cat chirping at birds (or even chirping when you’re playing together), it’s likely because her prey drive is on high alert and she can’t get outside (or get to the toy you’re using).

“We usually hear this chattering behavior when a cat can’t get to the prey,” Haddon told The Dodo. “For example, cats often chatter when they’re in the window looking out at birds. I think it’s the result of almost overwhelming frustration. The drive to hunt is so strong that it’s hardwired into cats.”

This chirping phenomenon occurs whether cats are indoor or outdoor cats, and even if you have an indoor cat, she *will* figure out some other way to fulfill their hunting instincts.

“If they’re kept indoors, many cats will hunt flies — and some will even ‘hunt’ their owners,” Haddon said.

So all of those times you felt like your cat was plotting against you weren’t just your imagination.

Note: Because of this instinct, most vets recommend keeping your cat indoors in order to protect your cat and local wildlife — indoor cats tend to live much longer and healthier lives.

Do all cats chirp?

Yes! As a matter of fact, it seems to be a universal language used by cats of all ages — and all breeds. “Even wild cats can make this sound,” Dr. Loftin said.

To help prevent your cat from feeling frustrated, try enticing them with different toys — feather chasers, lasers and foil balls are all great choices for kitties with active imaginations.